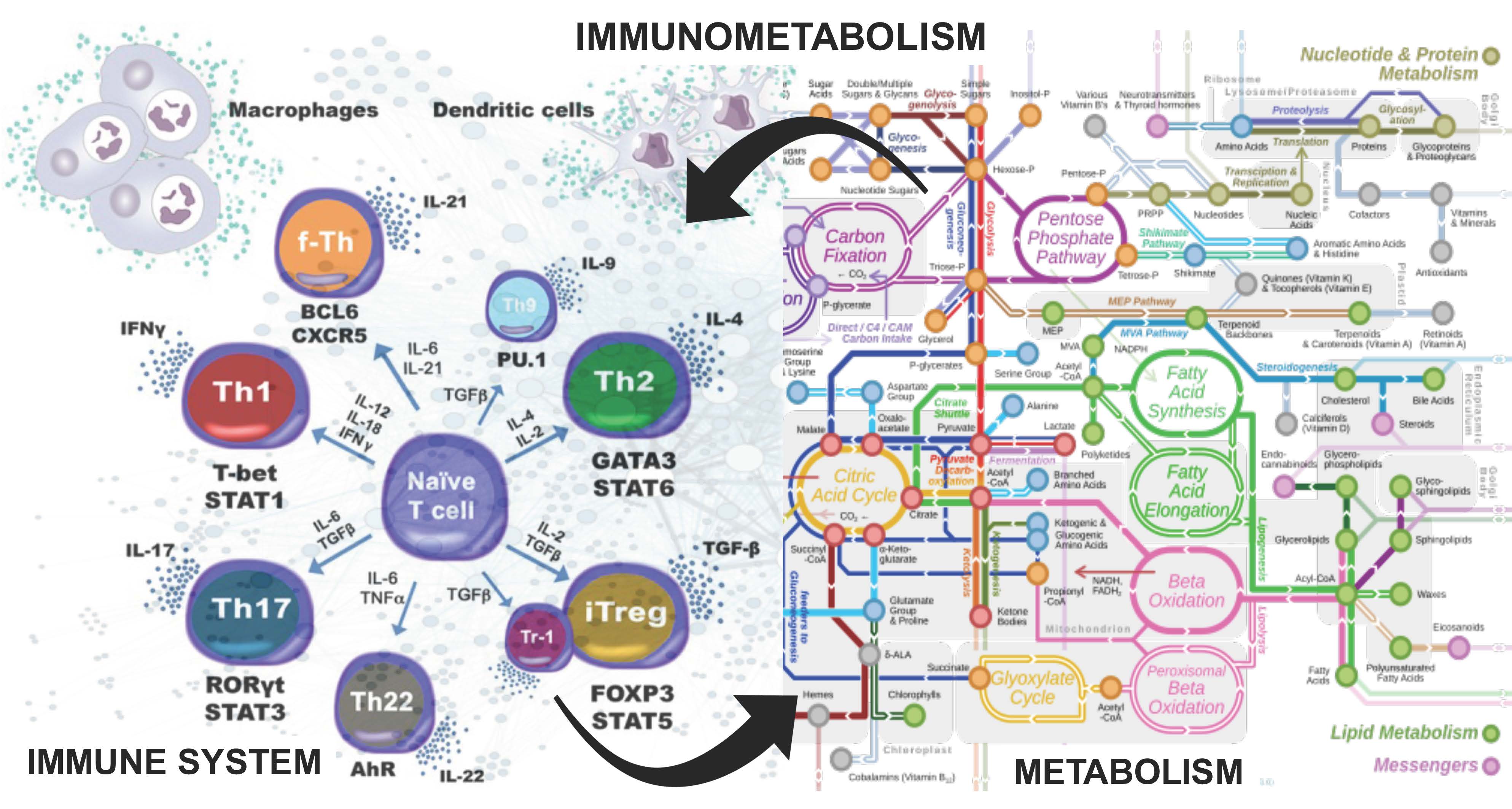 The NIMML Institute has pioneered studying the immune system as a massively and dynamically interacting complex system. Recent studies provide compelling evidence supporting that the function and phenotype of immune cells, inclusive of both innate and adaptive immune response, is highly intertwined with metabolic processes. Indeed, alterations in the concentration of metabolic enzymes and delivery of oxidative and gluconeogenic substrates in the cell often precede transcriptional changes that articulate inflammatory responses in infectious and autoimmune diseases. These fundamental metabolic processes are critical determinants of the function of immune cells. In the course of autoimmune diseases, multiple receptors transmit information about the environment through pathways at the intersection of immunity and metabolism. This emerging field of study, known as immunometabolism, has revealed the complex and conserved metabolic pathways that underlie complex human disease and has allowed us to focus on developing innovative interventions ways to manipulate these conserved regulatory networks to enhance and control immunity.

Immunometabolism describes the changes that occur in intracellular metabolic pathways in immune cells during activation. Six major metabolic pathways have been studied in immune cells in-depth: the glycolysis, the tricarboxylic acid (TCA) or Krebs cycle, the pentose phosphate pathway, fatty acid oxidation, fatty acid synthesis and amino acid metabolism. Metabolic pathways of immune cells must be configured to meet the demands of their function. Upon the initiation of the immune response, activated immune cells undergo a metabolic switch to meet the energy and biomass requirements to successfully execute effector mechanisms. To generate energy at high speed, effector cells favor an anaerobic metabolism characterized by increased glucose consumption and lactate production, while in regulatory and memory cells, oxidative metabolism is leveraged, presenting increased complete glucose catabolism through TCA cycle and oxidative phosphorylation as well as fatty acid oxidation. The synthesis of building blocks for cytokines, antibodies and lipid mediators, the energetic and structural demands for proliferation, the processes of phagocytosis and autophagy, and the generation of long-enduring memory cells require differential metabolic processes. Therefore, different immune cell types or activation states are characterized by distinctive metabolic niches. For example, while the pro-inflammatory subset of immune cells known as T effector cells (Th1 and Th17), critical for the development of autoimmune diseases and induction of responses to infection, favor anaerobic metabolism to quickly generate ATP, regulatory and memory T cells rely on oxidative pathways that more efficiently generate high amounts of energy at a slower pace. Through utilization of metabolic interventions, activation and function of immune cells can be altered.

Genes with inflammatory functions, such as TNF or IL-6, are overexpressed during infectious and autoimmune responses and are easily identified even as biomarkers. However, genes with immunometabolic roles experience modest changes in expression levels though they are critical in modulating inflammation. By altering the signals that drive differentiation and the metabolic pathways that support it, immune tolerance can be reestablished in patients where there is immune dysregulation, such as in autoimmune disease. The therapeutic manipulation of this cellular metabolism is a robust, conserved and multimodal mechanism to shift the balance between effector and regulatory immune cells. These strategies have resulted in resounding successes in the fields of immuno-oncology (such as pembrolizumab, an anti-PD1, ritonavir, a protease inhibitor, and everolimus, an mTOR inhibitor) and metabolism (such as metformin, an antidiabetic, and statins, lipid-lowering drugs) but remain a yet highly unexploited opportunity in infectious and autoimmune disease. Therapeutic activation of novel hubs at the intersection of metabolism and immunity, i.e. LANCL2, NLRX1, or PLXDC2 with potent regulatory functions, results in a shift of the immune response towards an immunoregulatory environment, inhibiting the development of exacerbated inflammatory responses, while still allowing the immune system to properly fight foreign threats such as infection and cancer. Targeting immunometabolic pathways through small molecules is not only tractable but has resulted in accelerating the development of novel product candidates that prioritize patient safety, promote immune tolerance and are currently in late stage clinical testing. With a multitude of genetic instability characterizing autoimmune disease patients, therapeutics targeting well-conserved and stable immunometabolic processes are a promising novel therapeutic strategy that could prove a successful path for therapeutic efficacy.